So here I am, I have been retrenched and nobody needs me because the dot com crash has happened and there are PHD people applying for my IT and Accounts jobs. It was just after Christmas and I had a few website jobs and sales of the eBook are trickling in but I give way more away than I sell.

I did notice about 18 months before I left work and the internet was running ok on dialup in the office. We received an mp3 file from the orphanage in Thailand. In those days computers did not come with sound cards so I did a quick course on how to install by a guy faxing me a couple of pages with photos on how to do it.

I went back that night with the sound card and installed it and in the morning the boss came in and turned on his computer and we all heard Tah Dah. Sound had entered the office over the internet.

So sitting there with no real job and 4 boys and a wife to support it came to me that if I could find some software to stream audio over the internet I could make a lot more websites. I went in a search and found Real Audio and a couple of others but they were big blotted files you had to download to play the audio let alone make them. 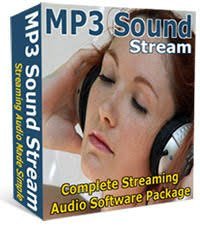 Then I found some software in the back blocks of music industry that was streaming audio with flash which was a tiny download compared to the others. I contacted the owner in the UK and was advised he had built it for his music friends. I asked if I could be an agent and after a few days he came back and said he was a programmer and not a marketer so he would sell me the whole program, code and graphics for a set sum. I bought it up with my family and we all agreed.

With the help of some friends (my son was doing computers at uni), some coke cola and pizza we redesigned it, renamed it and I launched it in October 2003. I quickly learned how to market online and set up ecommerce etc and it started selling almost straight away. Within 6 months I was making almost as much as I was at the charity and from then on doubled every 6 months for about a year and a half. 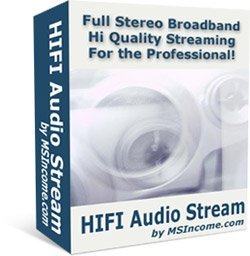 I contacted the programmer again and asked if he could upgrade to high quality sound as broadband was becoming more popular. He said ok as it was relatively simple and so I had my second product.

Tip: When I started selling these products I noticed certain groups exploding so I created separate sites for them. Same product different descriptions and examples. Lastly I found a programmer to build some other software on a similar bent and contracted him to do the same. Software, code, graphics. 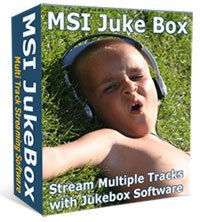 By now I had set up my business called MSIncome and started to deliver other products. The next one was a jukebox to stream over the Internet because there were heaps of musicians that bought the other software.

This allowed you to add a whole bunch on music and create a streaming jukebox on your website. 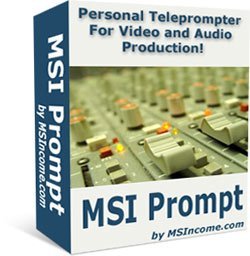 This next product was born because we started doing videos and Audio books and Podcasts were becoming popular.

You would add your text and it would scroll through and you could read and record while you were doing it. Lots of people just used it as a teleprompter as they could run it on their computer and put it behind the camera.

As time went on we found that people were using it in all sorts of untought of placxes like schools etc.

This was a natural progression and the software takes all the hard work out of linking your video to a player. If you have looked on the web for a player you will see they go from $25 upward and are very chunky. Then you have to work out how to link them with your video.

Our player is a small 3 kb file which makes it one of the smallest on the web. Also you can adjust the size to any dimension you want.

As you can see in the diagram to the left there are also a lot of added features for this powerful little player.